Bring gifts to the Dark Ones in this roguelike about witchcraft and sacrifice. Made for 7DRL 2022. Features previously created music by Joshua Morse!

Witchy draws direct inspiration from my favorite game series of all time, Spelunky. Instead of a side-scrolling platformer game, I wanted to make an overhead action game because I think it's easier to develop and it reminds me of my other favorites like The Legend of Zelda: A Link to the Past.

Instead of the spelunking theme I wanted to use a dark witchcraft theme because I love the lore and atmosphere. To make it more witchcrafty there's some light crafting: you can "power up" magic cauldrons by dropping items into them like dead snails or (gasp) live babies! Then drop an item into the powered-up cauldron and a new one pops out.

I experimented with a mechanic where you'd bring certain items to the end for various rewards, but I didn't feel like I had enough time to finish it out so I cut it entirely. Still, there's a lot to see here including 4 boss encounters, a hidden easter egg, and an optional hard way to beat the game.

I prefer simple games with straightforward inputs, so that's what you get here. The only things you can do are move around, carry items, and use them. But there's still a lot of complicated gameplay that can result from just that.

(Gamepad support is there but I can't get my gamepad to connect so I can't tell how well it works. I also tried to get Linux and WebGL builds but they failed. Might try again later.)

I started writing this codebase in 2020 but abandoned it not long after. This code is old and crusty to me because I've made several new, cleaner projects since then. Last time I opened the project it was completely broken. 7DRL seemed like the perfect excuse to get back in there, kick a few doors down, and try to make a game out of this mess.

The homegrown roguelike engine I used wasn't a complete game, but it was very far along. Most of the graphics and sounds were already in there (some drawn for other games) and it had a pretty capable procedural tilemap generator. For the 7DRL week, I focused on fixing the bugs, making the codebase tolerable, finding the fun, adding content, providing rewards for completion, and polishing.

This is the first game I've made all by myself since Indie Game Sim in 2016, so I'm a little nervous about putting it out there. Oh well, gotta ship things. I tried some of my own music but it just wasn't as good as the songs I used by Joshua Morse.

Holy cow what a fun game!

There are a couple of things that made the game really slow for me to get into, but once I was in I wanted to play all day!

Other than that I really loved this!

I don’t want to spoil anything - however the combinations I found almost always (other than a special sequence) resulted in mana, I really craved more combinations.

All in all great work! 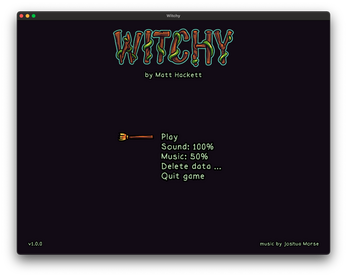 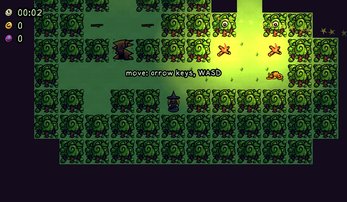 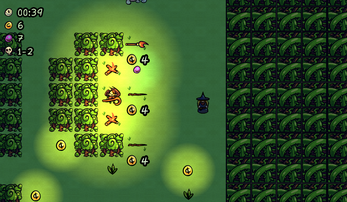